Pterosaurs were an order of flying reptiles scientifically known as Pterosauria. They were the first vertebrate animals to fly. There are many species of pterosaur divided into two main groups, rhamphorhynchoids and pterodactyoids. These amazing creatures ruled the skies of the Mesozoic Era.

There's so much that people have yet to learn about prehistory. Sadly, sometimes fossils fail provide answers and raise more questions instead. For many years, this was certainly the case about pterosaurs. Although you may want to call them dinosaurs, these extinct animals hardly fit into this class. However, They are more closely related to dinosaurs than to crocodiles and other reptiles.

Finding fossils of the pterosaur was a major challenge for many decades. The pterosaurs had thin walled hollow bones that commonly disintagrated before fossilization could take place. Only a fraction of these animals died in areas that had the goldilocks conditions for proper fossilization and preservation.

The first pterosaurs were found in the famous Solnhofen Limestone in what is now Germany. These fossils were so unusual that naturalists of the day could not put them in any of the known classes of animals. Given the name pterodactyl it took many years and interpretations before scientist agreed that these were flying reptiles.

Recently, however, much has been learned about these animals, and a variety of exciting specimens have been collected. This has opened the door to new pterosaur exhibits, and it's provided a wealth of information about these flying reptiles.

According to research, they existed in various sizes. Some were as tiny as small finches. Others had wingspans of 33 feet or greater. They are on record as the largest animals to ever achieve flight.

Currently, there are 150 known species of this animals, but the prevailing belief is that there may have been thousands of species throughout the ages.

Having studied newly found fossils, scientists believe the pterosaurs occupied many different lifestyles. For instance, some are believed to have spent a goodly portion of their time hanging upside down in trees, not unlike bats or sloths. When mobile on land, they may have run and hopped on two feet. Other scientists still surmise that some species may have spent time walking the earth on all fours with their wings carefully folded like a closed umbrella.

One of the most notable features of a pterosaur was its crest. Surprisingly, however, scientists have yet to determine what their crests were used for. They may have been for steering or cooling, for sexual selection, or even for species recognition. In most theories, the existence of the crest is largely associated with mating an reproduction. Recognition of species would have made it easier for the pterosaur to breed. Most analyses of the possible physical functions of this structure indicate that it wasn't effective for facilitating faster or more streamlined movement at all.

As far as reproduction goes, the pterosaur laid soft-shelled eggs. This has also complicated the fossil record and left fewer means by which the animal could be studied. In comparison to the hard-shelled eggs left behind by dinosaurs, remnants of softer shells aren't really made to last. 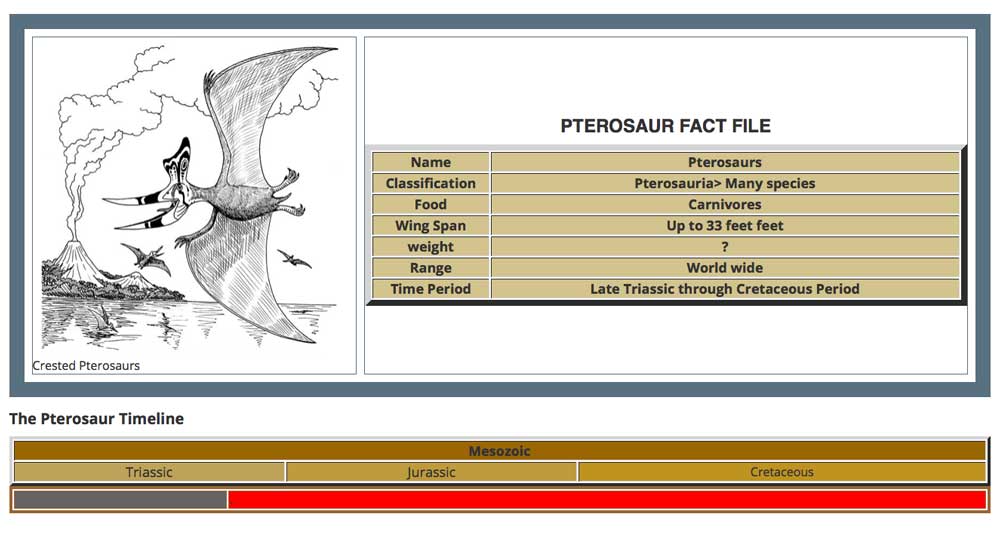