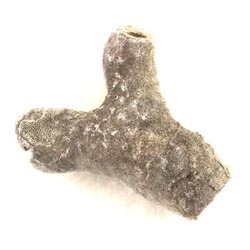 Bryozoans are tiny colonial animals. Sometimes called moss animals, there are thousands of species living today and many times that number that have been identified in the fossil record. Individual members of a colony are called zooids. Each zooid builds a home for itself by making a shell of calcium carbonate. These individuals join together to create the colony.

The fossil that you see pictured on the right is called heterotrypa subfrondosa it is from the Ordovician Period and is about 450 million years old. It was found in Carroll County, Kentucky. It was the home of thousands of individual zooids. If you could look at it with a magnifying glass you would see tiny pits. Each pit was the home of one zooid. They live by filtering water for microscopic organisms. Most species live in salt water but there are also many freshwater species. In general they prefer moving warm water.

Bryozoans are not well known by most people. Those that do know about them like those in the shipping industry look at these tiny animals as problems. They attach themselves to ships’ hulls, piers, and water intake tubes. While the individual animals are tiny, the colonies can grow to be several meters across. In some areas dead bryozoans colonies create layers of limestone many meters thick. Some scientists are finding chemicals produced by these creatures can be helpful to humans. One compound called bryostatin is being studied as an anti cancer drug.

Bryozoans have been around for almost 500,000,000 years. Fossils are found in  Ordovician Period rocks and they are represented in every time period up to the present time. In fact these “moss animals may be the most abundant fossil on earth. 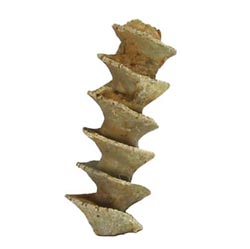 They belong to the phylum called Lophophorata. They are related to brachiopods. They are filter feeders and have flower like tentacles that capture their food floating by in the water around them.

They can reproduce sexually or by budding.

Archimedes was a fenestrate bryozoan colony. Fenestrate means they built lace like structures for their homes. The zooids lived in tubes in this structure which was attached to a screw shaped support. The fossil that you see is this support structure. This fossil is from the Mississippian Epoch of the Carboniferous Period and is about 324 million years old. It were found in Indiana.