The Cambrian Period:
An Explosion of Life 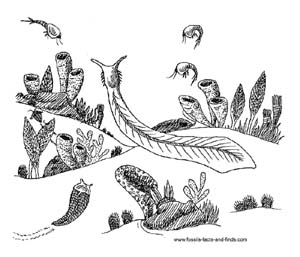 The Cambrian Period is perhaps the most dramatic and  influential time for life on earth! Why was there an explosive radiation of new life forms at this time is still a mystery. We do know a lot about what happened at this time. We just don't know why it happened. What were the forces at work to create this massive change in the flow of life? Read on for a brief outline of what is known about this period.

It is the beginning of the Paleozoic Era. This period gets its name from the Latin name, Cambria, for  Wales where the first examples of this type of ancient life was found. The period lasted for nearly 53 million years, from about 543 million years ago until 490 million years ago.

The Prelude To the Cambrian Period Explosion

While it is true that there was a massive explosion of new life in the time of the Cambrian Period it didn't come from nowhere! We know life existed for billions of years in the time before the Cambrian. Though there are divisions in this time it is generally referred to as the Pre-Cambrian. For most of the billions of years before the Cambrian the life that existed was microscopic bacteria that did not change much in all of that time.

Things did happen though, Cyanobacteria sometimes called blue-green algae was producing oxygen. It took a long, long time but eventually this set the stage for more complex life to evolve.

Fast forward to the time just before the Cambrian called the Ediacaran Period. We know there were multicellular life during the Ediacaran.  Actually there were lots of creatures. We don't understand what they are because they are like nothing that is alive today or anywhere else in the fossil record. We can't even tell if they are plants or animals!We also don't know how they developed or how they gave rise to the Cambrian explosion. But we are pretty sure that they did!

Climate
The climate at the beginning of this period was cold, but over time the climate in all parts of the Earth grew warmer. This made the seas a good place for many species to live. The continents were still forming. They were mostly barren rocks. The land had no plant or animal life on it yet.

Explosion of Invertebrate Life
During the Cambrian Period there was an explosion of life forms. Most of these were in the water. Many animals with no backbones lived in the shallow seas. These animals were invertebrates.

One species was so plentiful and had such great numbers and so many species that it is sometimes called the ruling species of the period. This species was the 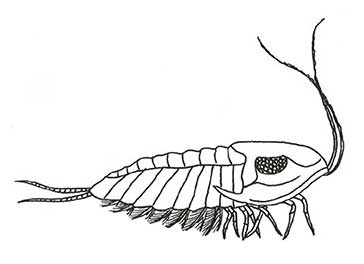 arthropod with a tough outer skin. It got its name from the three lobes in the hard skin. The trilobite was also one of the first animals to have eyesight. During the Cambrian there were more than 100 types of trilobites.

Other Invertebrates
There were plenty of other species living during the Cambrian Period also. Mollusks, worms, sponges and echinoderms filled the Cambrian seas. There were other living things present then that don't fit into any of the categories we know about today.

No Backbones Yet, But...
There was even an early type of chordate living during the Cambrian Period. It was the Pikaia. Pikaia looked a bit like a worm with a long fin on each side of its body. The nerve cord was visible as a ridge starting behind the head area and extending almost to the tip of the body. 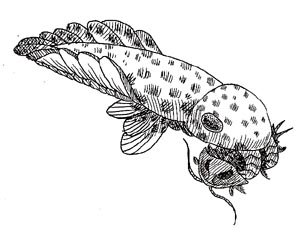 The Top of The Food Chain
One of the most fearsome hunters in the Cambrian seas was the Anomalocaris. This animal had an exoskeleton like an arthropod, but it did not have the jointed legs that would make it a true arthropod. This large animal fed on trilobites and other arthropods, worms and mollusks.

Sponges
Sponges grew in Cambrian seas, too. These animals belong to the phylum porifera because of all the tiny pores in their bodies. One species of sponge from this period had many branches that made it look like a tree. Another type of sponge looked like an ice cream cone-without the ice cream, of course! Many of the sponges became extinct when temperatures dropped at the end of the Cambrian period.

Hard Parts
Many of the creatures living in the Cambrian seas developed hard structures for defense, hard shells, scales, and spikes covering the outside of the body. The Wiwaxia lived on the bottom of the sea. The dorsal side of its body had scales and spikes for protection. The underside of Wiwaxia was soft and unprotected. Trilobites also living on the bottom could burrow under the Wiwaxia and attack the defenseless belly. 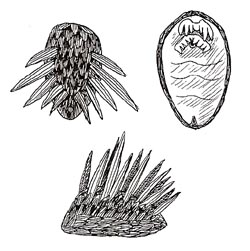 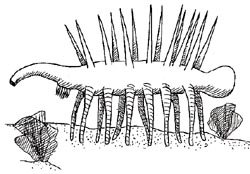 Hallucigenia stood on seven pairs of tall legs. Its long, tube-shaped body had two rows of tall spikes along its back. This type of protection would have been very important for the animal because it had no eyesight to warn it of dangers.

Plants
The plants of the Cambrian were mostly simple, one-celled algae. The single cells often grew together to form large colonies. The colonies looked like one large plant.

The Cambrian Period began with an explosion of life forms. It ended in a mass extinction. Advancing glaciers would have lowered the temperature of the shallow seas where so many species lived. Changes in the temperature and the amount of oxygen in the water would have meant the end for any species that could not adapt.

What came before the Cambrian Period?

The next period is The Ordovician Period

These Trilobites of The Cambrian Period pictured below are available for purchase on our sister site fossilicious.com 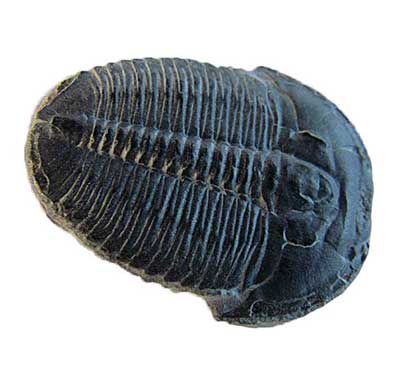 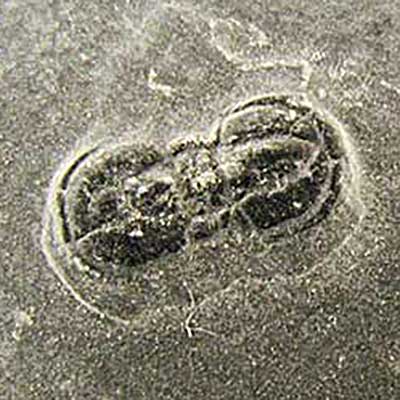