The Mesozoic Era
The Age of Dinosaurs

The Mesozoic Era, here is all you need to know about the climate, continents, plants and animals of the Mesozoic, including the dinosaurs, the first mammals and flowers.

The Mesozoic begins where the upheavals of the Permian Extinctions end. A mass extinction at the end of the Permian Period had eliminated most of the species of life that had existed throughout the Paleozoic Era. Sometimes called the Age of Dinosaurs because this era becomes dominated by dinosaurs and reptiles. But so much more happened during the 3 periods of the Mesozoic.

The Continents
Toward the end of the Paleozoic Era the land that would become Europe and Asia slammed into North America. By the time of the Mesozoic Era  Pangea the super continent had formed. It was roughly the shape of a “C” and contained most of the earth's land. The huge land mass protected the Tethys Ocean which lay across tropical latitudes. Pangea and the Tethys were ringed by the Panthalassic Ocean.

Climate During The Mesozoic Era

The temperatures, both on land and in the ocean, were much higher than during the Paleozoic, and climates were more tropical in nature. Despite this, the seas were lower, leaving different types of land masses for life to deal with. Over all the Mesozoic Era was dryer than in the Paleozoic Era. There were more deserts and less marshland.

Within the three periods of the Mesozoic Era ( Triassic, Jurassic and Cretaceous) there were times of wide temperature and seasonal variation. 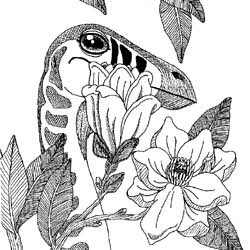 Life Recovers From The Permian Extinctions

It took most of the first and second periods of the Mesozoic, the Triassic and the Jurassic periods, for the diversity of species to recover and achieve some balance. While plant species had survived somewhat better than animals over the Permian Extinction, new types of plants developed to survive the changing conditions.

The warmer drier conditions of the Mesozoic required new reproductive methods in plants. Ferns and gymnosperms developed. Their reproductive methods allowed for good protection of the spores or seeds that would have to get through periods of drought before growing into the infant plant.

The survivors of the Permian Extinction had very little competition. Corals, mollusks and fish dominated the life in the oceans. Some Reptiles took to the water to become the first air breathing hunters in the oceans. They took on a variety of forms, including the mosasaurs and the plesiosaurs. These marine reptiles rose to the top of the food chain.

The Rise of The Reptiles and Dinosaurs

The animals that developed in the Mesozoic needed new body types to survive the extremes of temperature and moisture. Amphibians developed respiratory mechanisms that allowed them to live in or out of the water for extended periods of time. But it was the reptiles that were better adapted to the warmer dryer conditions. They developed thick, leathery skin on both their own bodies and their eggs. The reptiles thrived, dominating the landscape in both size and numbers. They are known as diapsids. Diapsids are characterized by having two openings on each side of the skull behind the eyes.

The dinosaurs evolved from these reptiles and were themselves diapsids. During the Jurassic and Cretaceous Periods the dinosaurs ruled the earth. 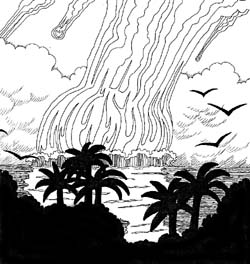 Both plants and animals reached giant proportions during the Mesozoic. During the 180 million years of the Era, reptiles lived on land, in seas, and in the air. Small mammals, although not significant during the time, did exist during this era.

Mass Extinction Ends The Mesozoic Era
Another mass extinction occurred at the end of the Cretaceous Period, bringing an end to the dinosaurs and the tropical forests. This extinction, while not as broad and devastating as that at the end of the Permian, had the effect of eliminating a way of life that has not been replicated.

Most researchers agree that the Mesozoic Era ended at least in part due to the impact of an asteroid.

Preceeding the Mesozoic Era is the Paleozoic Era

After the Mesozoic Era is the Cenozoic Era

Return to Clock of Eras