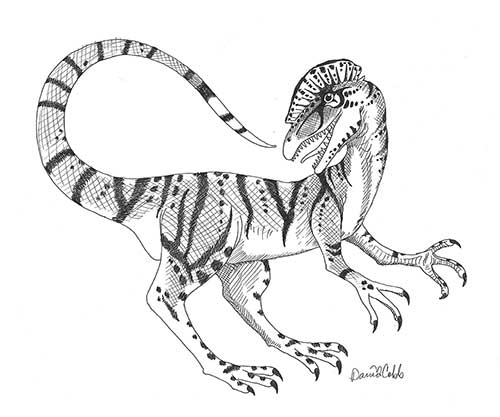 Dilophosaurus was a theropod dinosaur that lived in what is now North America during the Early Jurassic period, about 193 million years ago.  The Jurassic period was one of the first time periods in which dinosaurs lived. This means that this dinosaur was a relatively recent descendant of the first true dinosaurs, which evolved in South America during the preceding Triassic period, about 230 million years ago.

Dilophosaurus was about 23 feet in length, and weighed around 880 pounds, that's about as much as 5 large boars, making it one of the earliest large and predatorial dinosaurs. Dilophosaurus stood on two strong legs, with massive thigh bones, and could reach speeds up to 20 miles per hour! Dilophosaurus fossils have been found together, pointing to the fact that they may have traveled in packs.

Dilophosaurus means “double crested lizard.” It was actually named after its two plate-shaped crests, making it look like it was always sporting a mohawk.  The crests were most likely there for display, and could have been brightly colored, particularly in males. The crests are usually found detached from the skull, but careful reconstruction has shown that they most likely sat on top of the skull.

It had a big head, with a  jaw that was slender and delicate at the front, but deep at the back. The teeth were long, curved, thin, and serrated, perfect for tearing and piercing meat.  The teeth in the lower jaw were much smaller than those in the upper jaw.

Dilophosaurus was one of the species of dinosaurs portrayed in the film “Jurassic Park.” However thrilling and compelling the storyline, the dinosaurs were falsely represented for dramatic effect. The movie depicted Dilophosaurus doing things that it is not believed to have done in real life. For instance, in the movie, the dinosaur is shown spitting poison at its prey to blind it. This is a false depiction of not only Dilophosaurus, but of all dinosaurs. There is no evidence that any dinosaur could spray venom. Another misconception presented as fact in the movie was the expandable neck frill shown on these creatures. Wrong again! There is no proof whatsoever to back up the existence of this anatomical feature. Also, they got the size all wrong. Dilophosaurus, or the grossly false depiction, showed the dinosaur as small as a dog. In reality, this dino was tall and massive, and could probably gobble a dog or two up, no sweat. I guess Steven Spielberg didn’t care to do his research. 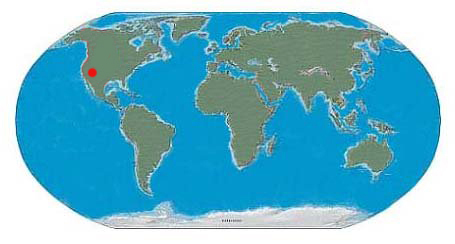 Its bones were first discovered in 1942 in Arizona by Sam Welles. In 1970, he named it Dilophosaurus. When first discovered in 1942, the Dilophosaurus specimen was lacking the head crests and was falsely named Megalosaurus wetherilli. It was not until another and more complete specimen that featured the crests was recovered over a decade later that the distinction could be made.