Trilobites, existing today only in fossil form, was a class of early arthropod. When life exploded into animal form marking the beginning of the Paleozoic, it was this prolific arthropod that became the signpost for the era.  Eras are geologic time periods that have characteristics that sets it apart from all the others.

When Did Trilobites Live?

Trilobites make their entrance onto the earth's stage during the late Cambrian Period. This is the first and oldest division of the Paleozoic Era. It was named for the location in which the rock layers were first identified: Cambria or Wales. It is followed by the Ordovician Period, the Silurian Period, the Devonian Period, Carboniferous Period, and finally the Permian Period. Each of these periods also took their names from locations associated with the types of rock layers found there. 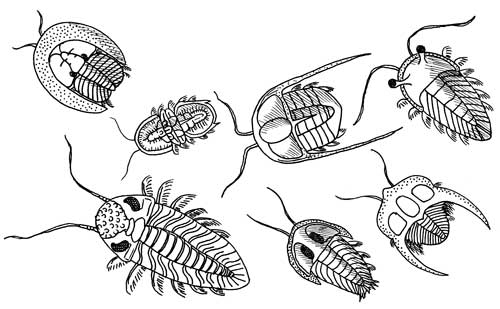 It is generally believed that the decline was related to a change in climate, due to an ice age, which lowered ocean levels and thus causing a change in land mass.  This ice age lasted about 40 million years spanning the Ordovician and Silurian Periods. During this climactic change, more than half the species of life on earth became extinct.

So, what was this ancient arthropod and what about it inspires such fondness among students of all ages? Could it be its unusual body armor that allowed for unique defense mechanisms? Perhaps it’s the almost friendly appearance, with its prominent “face.” Or is it simply because of its broad diversity among the remnants of a long extinct species? A close look at this ancient creature reveals a certain familiarity, sharing characteristics with modern-day species known to us all.

I’ve already mentioned that it was one of the first arthropods. Arthropods still exist today, of course; they are those creepy, crawly bugs that invite themselves to our picnics (ants, spiders, mosquitoes, and the like) or the crusty seafood delicacy that occasionally graces our tables. (Take your pick, shrimp, lobster or crayfish: all arthropods!) The trilobite earned its place among the arthropods because it had a hard exoskeleton, a body that had at least a couple of sections, and jointed legs.

It’s pretty easy to observe the hard exoskeleton in a trilobite fossil. It’s the part that turned to stone! That process is another whole story, but the important part is that in this arthropod, the exoskeleton was so distinctive that paleontologists use the characteristics to help place these animals into different groups for classification. More on that a little later… For now, lets look at the segmented body.

There are three easily identifiable sections: the head or cephalon, the thorax, and the pygidium or posterior section.The thorax was made up of flexible segments. Trilobites could roll up into a ball as a defense tactic to protect the softer underbelly. 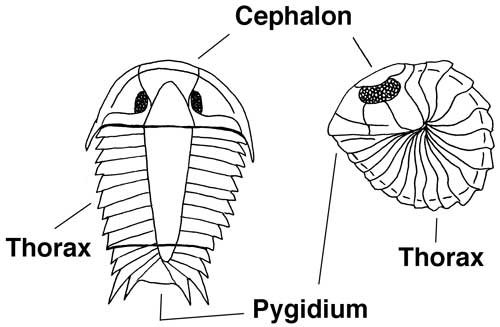 One might suspect this arthropod to be named for these three sections, but it was not. Its name, means three-lobed, referring to the three lobes that run head to tail: an axial lobe through the center and two pleural lobes on either side, left and right. This 3-lobed characteristic is common to all species of this class of arthropod, even though the appearance of the three body sections can vary greatly.

One more note about that exoskeleton. This hard mineralized outer shell could not grow. For the trilobite to get bigger they had to shed the exoskeleton. They did this by splitting it at the front of the cephalon (head ) and crawling out. One common species, the El rathia kingii molted more than 20 times during its life!

The matter of jointed legs was not as easily determined. The legs were softer than the exoskeleton, even if they were somewhat crunchy, so they didn’t tend to preserve well. Luckily, there have been a few specimens found that showed those legs and some antennae, too.2 There are only a couple of places on earth (so far) where trilobites were fossilized showing their legs: the Burgess Shale in western Canada and the Chengjiang in China. Something about the circumstances of burial must have been similar for these two distant places to have made such detailed preservations.

Trilobite fossil classification is challenging based on the sheer numbers of species alone. Saying that trilobites were prolific in their heyday is rather an understatement. Assuming that there are still many undiscovered trilobite species lurking below the surface of our planet, paleobiologists have already organized the class of known trilobites into a dozen orders, over 150 families, approximately 5000 genera and more than 15,000 species! This widely diverse class of arthropods ranged in size from as small as a millimeter in length to close to 70 centimeters, but size alone is not worthy of creating these sorts of distinctions. There are differences in body shape, exoskeleton texture, the sutures that jointed the exoskeleton plates, and the eyes. The eyes alone have so many variations that one could make an entire study of just that aspect of trilobitism!

With so many variations, trilobite fossil classification is truly a complicated affair. In its most simple form, the trilobites are a class of the phylum Arthropoda of the Animal Kingdom. They are on the same classification level as present-day insects, crustaceans, and arachnids.

Separation into particular orders is based, at least in part, upon the size and shape variations of the three body segments: cephalon, thorax and pygidium. Below are two examples of body variation.On the left is a redlichiida trilobite and the one one the left is an agnostus trilobite. Easy to see the difference between these two.

But size and shape alone are not the only considerations for trilobite fossil classification. One order, the Lychidia, takes into consideration the quality of the exoskeleton: granulate (granules on the outer exoskeleton) or tuberculate (tubercles on the outer skeleton.) Then there is the pattern the tubercles makes on the body: rows of two, or single, or random…you get the idea, each of these 15,000 species has some unique identifying characteristic. And for that characteristic to be labeled, in a fossil, no less, there would need to be some pretty close scrutiny taking place!

The Trilobite was a marine animal, meaning that it lived in “salt water,” but certainly Paleozoic Era “salt water” was chemically much different than that of today’s oceans. Fossils have been found in rock formations that indicate a wide range of temperature, from shallow tropical seas to deep, cold ocean shelves.

Most of our ideas about the life of trilobites are based on observations of their body structures. This differs significantly in various species suggesting a variety of locations and eating habits. Some bodies seemed designed for burrowing into the sea bottom or benthos. Others’ bodies appeared to be suited for crawling along the sea floor or Paleozoic reefs in search of prey. There are even trace fossils that show tracks left by the trilobite ending at a poor worm’s burrow door! Some species’ body plans made them capable of swimming in the water column and spending little time on the ocean floor.

Perhaps the most interesting ability of the trilobite was enrollment: its capacity for curling itself into a “ball.” It's thoracic exoskeleton is made of sections, like the ridges in an expandable watch band. The flexible material between these ridges allowed the thorax to bend. The cephalon and pygidium then fit together, often perfectly matched so all the legs and antennae would be protected securely inside the exposed exoskeleton. Sometimes this rolling left the sharp points of a specialized cephalon or pygidium exposed to fend off would-be predators. Perhaps enrollment had other purposes, as well. Surely this posture would have allowed a trilobite swimming in the water column to change depths very rapidly. Regardless of the purpose, enrollment is a fascinating ability that we can observe in the many fossils that have been preserved in various stages.

The diets available in these different habitats would have been a reflection not only of the habitat, but also of the body plans of the trilobites that inhabited them: sort of a chicken and egg question. The body types that would have worked best crawling around on the ocean floor would have been particularly suited to scooping up detritus (organic debris), worms, and other small invertebrates.

Some body structures were designed to filter through the sand. Their bodies contained gills that helped gather the food from the filtered water. Often there were specialized bacteria living in these gills to help in the breakdown of the food as it was filtered in. The bacteria was ingested right along with the food particles. This strange-but-true situation is called a symbiotic relationship, where the two organisms depend on each other for sustenance. The bacteria seemed to get the short end of that stick! 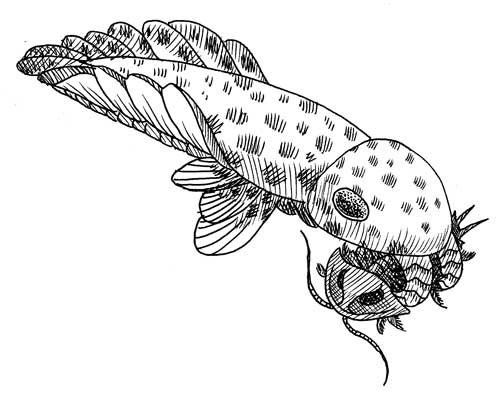 While trilobites were prolific, they probably didn’t exactly rule the ancient seas. There must have been some predator who thought they would make a tasty lunch, but who could it have been? Perhaps it was the Orthoceras, a large cephalopod with reaching tentacles that surrounded their mouths. One fossil specimen indicates injury by the Anomalocaris, a large predator whose ring-like mouth probably could have swallowed a trilobite completely in a single gulp.No matter what the particular characteristic that inspires its popularity, this fossil will remain at the top of many collectors’ list. The wide range of availability makes it an affordable beginner’s piece as well as a boon to the paleontologist seeking to more deeply understand the nature of the ancient oceans in which the trilobite existed. For the avid collector there are some rare and unusual specimens to find. Perhaps it is simply that as one holds and turns this ancient creature, a time so long ago connects to the present and comes alive!

A special thanks to Dr. Sam Gon III for the use of his graphics, click here to visit his website


Check out some of the Educational Materials for sale on our sister site fossilicious.com.