The Devonian Period:
The Age of Fish (Old School)
What about Life Moving Onto Land? 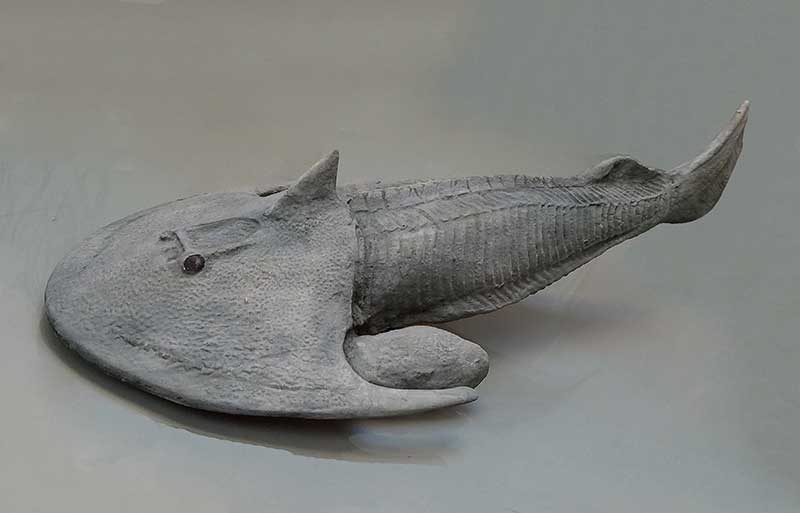 The Devonian Period has been commonly referred to as the age of fish. Fish really do dominate the oceans during this time period but it is misleading. So much else happens: Plants and animals begin to colonize the land, reefs are being built, continents crash into each other, and mountains form to name a few. So let's take a look at the details. This fourth Period of the Paleozoic Era lasted from 417 million years ago to 354 million years ago. It is named for Devon, England where the old red sandstone of the Devonian was first studied.

The Continents During The Devonian

During the Devonian there were important changes in the land masses on the globe. North America and Europe had collided forming a large continent called Euramerica. This caused the formation of the Appalachian Mountain Range. The other large land mass was Gondwana. It was made up of South America, Africa, Antarctica, India and Australia. These two large land masses lay close to one another near the equator. The Devonian Period- Life on The Land

Laying so close to the equator meant that the climate of the Devonian was warm. The warm temperatures made life on land particularly good for the plants. They developed vascular tissues to carry water and food through roots and leaves. The most important development was the seed. Now plants were not dependent on the presence of water for reproduction and they could move further inland. Ferns and the first trees began to cover the land.

Insects and Other Animals Find Homes On Land
The plant-covered lands made a good home for the first wingless insects and spiders. Even a primitive vertebrate, the tetrapod or four-footed vertebrate, developed the ability to live outside the water and move on land.

The Age of Fishes

The Devonian is known as the Age of Fishes. It is famous for the thousands of species of fish that developed in Devonian seas. We know this because of the fish fossils found in Devonian rocks. When fish first started to develop, they had no jaws and the support structure was made of cartilage. This material doesn’t fossilize well, so the earliest fossils were of fish whose outside skin was protected by scales and plates made of boney tissue. These fish were called Ostracoderms. Their name means “shell-skins.” These animals appear in rock from the late Silurian and early Devonian periods. 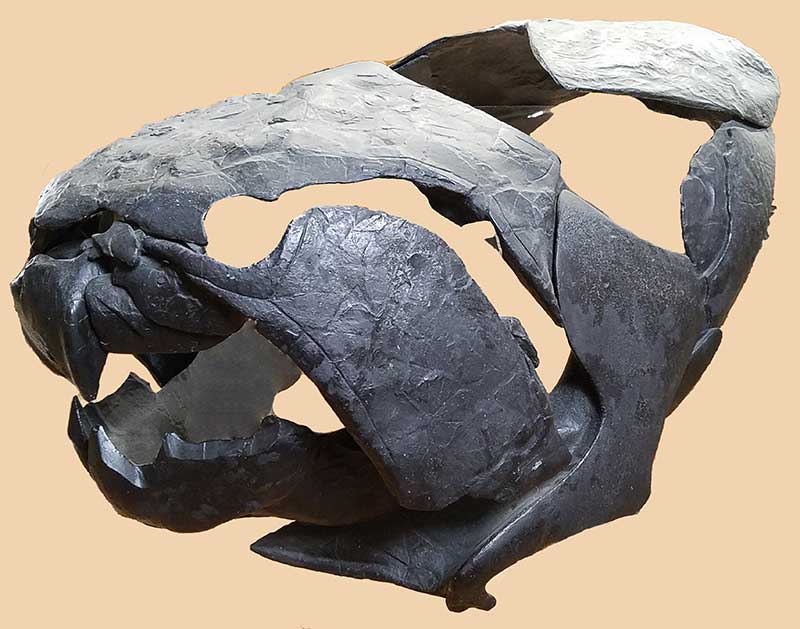 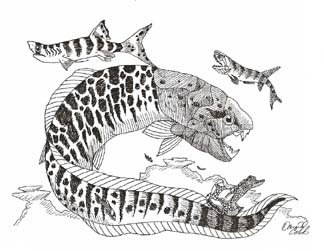 Fish with Jaws
The next development was the fish with jaws, gills and paired fins. The Placoderms were the first fish to have all three of these characteristics. They still had the “shell skin” of the Ostracoderms, but it mainly covered the head and neck area. The largest of the Placoderms was the Dunkleosteus. It was a huge predator in the Devonian seas. It could be as long as 10 meters. Instead of teeth, it had large boney plates that stuck down in the front of its mouth opening. The powerful jaws were deadly to other fish, sharks and even other Dunkleosteus. Ancient Sharks
Sharks, or Chondricthyes, developed during the Devonian also. Sharks are thought to be descendents of the large Placoderms, but they lost the ability to form the boney armor on the outside of the body and were unable to form bones on the inside also. Their body is supported by cartilage. Because of the skeletons of cartilage, very little fossil evidence is available. They did leave behind their teeth. Much of the information we have about ancient sharks comes from the many different types of fossil teeth that have been found. Sharks first appear during the middle of this period.

The Bony Fish; Osteichthyes
The bony fish appear during the middle Devonian Period. The first of these are the lobe-fins. These fish have pairs of fins with fleshy lobes at the base and more typical fin membranes at the ends. The lobes contain jointed bones. These lobe-fins are thought to have evolved into “legs” and eventually into amphibians that spend their lives both in and out of the water.

The coelacanth is a lobe-fin fish that developed during the Devonian. For years it was thought to have gone extinct at the end of the Mesozoic Era along with the dinosaurs, but in 1938 a living coelacanth was caught. Since then coelacanths have been seen from time to time in the Indian Ocean.

The Lung Fish
The Dipterus was a lungfish that developed at this time. In many ways it looked like the lobe-fins with bony flesh at the base of its fins. But the Dipterus had lung sacks branching off of its throat that got air from the gills. During the Devonian Period, there were huge swings of floods and drought. During drought times, when lakes turned into ponds, the plants used all the oxygen in the little water that remained. A Dipterus that was stranded in such a pool could stick its head out of the water and get the air it needed to stay alive.

The Reef Builders
The reef building work of the sponges and corals went on through the Paleozoic Era. They built some of the largest reefs in the world. Invertebrates grew well in Devonian seas too, so many new species developed. The ammonite is one of these.

Fossils from the Devonian Period for sale at our sister site Fossilicious.com 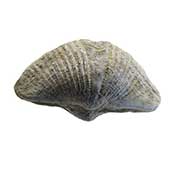 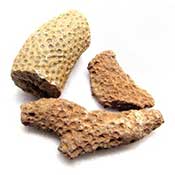 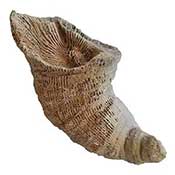 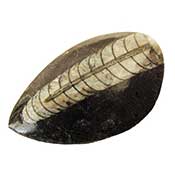