Facts on Fossils
Extremes In The fossil World

Read through these Fun facts on fossils and find the biggest, oldest, longest fossils ever found!

The Largest Nautiloids
The largest nautiloid on record is called Endoceras. It is from the Ordovician Period and has been measured up to 13 feet (3 ½ meters) long.

The Biggest Trilobites
Isotelus rex is the largest known species of trilobite. It was found in northern Manitoba. This humongous arthropod measures about 28 inches (72 centimeters) long. Isotelus rex is now on display at the Manitoba Museum in Winnipeg.

Earth’s Oldest Fossils
The evidence of microscopic life forms has been detected as old as 3,700 to 3,800 million years ago. This evidence was found in Isua greenstone in Greenland. There have been claims of evidence dating back as far as 3,850 million years ago but these are not universally accepted. Scientists continue to refine dating methods to get reliable data on the earliest life on earth.

The Oldest Fish Fossils
The oldest fish fossils on record were found at Chengjiang, in Yunnan Province, China. Two species have been found dating from about 530 million years ago. Haikouichthys ercaicunensis, and Myllokunmingia fengjiaoa, are recent finds. If verified these finds will rewrite the fish chapter of evolution.

Largest Dinosaur
Sauroposeidon may have been the largest dinosaur ever to walk the face of the earth. Scientists believe this gigantic dinosaur would have stood 60 feet tall (18 meters) and weighed 60 tonnes! Sauroposeidon means "earthquake god lizard”. This dinosaur may also hold the record for having the longest neck. 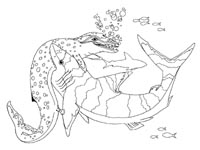 Biggest shark
Megalodon is estimated to have been 40 to 50 feet long and weigh 48 tons!

There are some places even older than these two! In Precambrian times multicellular life has been found in several places. The Ediacaren Hills, in Australia is one of these places. Fossils there date as far back as 570 million years. The trouble is that we don't know much about these fossils. Were they plants, animals, or something else? Scientists are still trying to unravel the mysteries of the Ediacaren Period. We do know that lots of different living things left impressions of life from that time. More information about the Ediacaren Period can be found here.