Triceratops
Facts You Need To Know

Triceratops are one of most recognizable dinosaurs, because of their prominent three horns. These horns were likely used for protection from predators. Some say the horns were for attracting mates or showing dominance, similar to antlers of a deer or horns of a mountain goat. They also had a pretty distinctive frilly face, like a big shield. Some scientists think that the big frill helped regulate body temperature, like an umbrella on your face.

Click on the picture for a downloadable coloring Page. 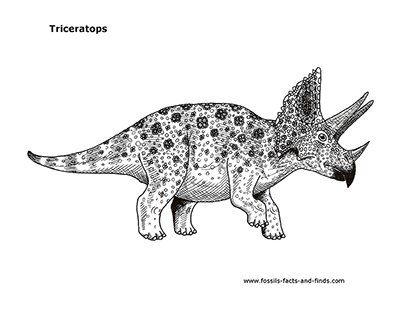 This dinosaur’s name comes from the Greek language, ‘tri,’ meaning three and  ‘keratop’ meaning horned face. It was an Ornithischia, or bird-hipped dinosaur, and was the last of a long line of ceratopsian dinosaurs. Its probable ancestor was Protoceratops which lived about 75 million years ago.

All of the ceratopsian dinosaurs  were herbivores, or plant eaters and walked on four legs. They also all had a distinctive frill. The family name is ceratopsidae. All of this group had some kind of horns.

Triceratops lived about 65 million years ago, during the Cretaceous Period. Tyrannosaurus Rex, the big bad bully, also lived in this time period, and often challenged the Triceratops to a dino duel. The shape of its face and horns proved very useful in these battles, and were good tools in fighting off the T-Rex.

Ever heard your mom say that vegetables will make you grow big and strong? It certainly was true for this dinosaur. They were about 10 feet tall, 26 feet long and weight 6 to 12 tons. They used several sets of teeth, called batteries, to chomp these lovely greens. Imagine if you had rows of teeth. Think of all that chewing!  And get this, their teeth would always regrow. How amazing is that! No trips to the dino dentist….ever.  Along with some serious choppers, Its head   could grow to be 7 feet long.

Triceratops Fossils Have Been Found Here.

The first fossil of mostly intact triceratops skull was found in 1887 in Denver, Colorado. The bones were sent to a paleontologist named Othniel Charles Marsh, who originally thought it was a bison. Its horns were even still attached. The next year in 1888, however, another set of similar bones were found by another paleontologist names John Bell Hatcher. After a closer inspection, Marsh realized he was wrong about the bones, and changed his mind. Everyone makes mistakes- even scientists. Other fossils have been found in Montana, South Dakota and Wyoming. Between 2000 and 2010, forty-seven triceratops skulls were found in an a single area of Montana, called Hell Creek Formation. The largest Triceratops skull was measured at 8.2 feet long, almost a third of its body length.