T Rex:
The Biggest Most Powerful Carnivore Ever?

T-rex is easily the most popular of the dinosaurs and with good reason. Until recently it was thought to be the biggest baddest carnivore ever to live on land. One of the largest theropods ever at about 40 feet long this dino had huge bone crunching teeth, like the size of bananas. Its head and jaws were equally big. Size alone isn’t the whole story with this beast though. My theory is that it is the ability to scare us senseless across more than 65 million years that puts this monstrous dino at the top of the list!  Yes, giganotosaurus and spinosaurus were a bit bigger but I don’t think either of these will dethrone the king!

Its proper name is Tyrannosaurus Rex, the tyrant lizard king. While this is the species name for a certain coelursaurian theropod dinosaur, it is also the name given to a group of theropods with similar characteristics called tyrannosaurids.

This group had large heads and jaws,  powerful hind limbs with a bipedal gate. short  arms and two clawed fingers, and long thick tails. They were also equipped with excellent vision and a highly developed sense of smell. As a group they were carnivores.

Bones from t-rex have been found throughout western North America and also Mongolia. They lived at the end of the age of dinosaurs. They were among the last of the non-avian dinosaurs and went extinct during the Cretaceous-Paleogene extinction 65 million years ago. 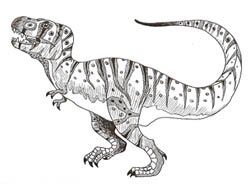 One of the great dinosaur debates of our time is about the tyrannosaurs ability to hunt. Some say it was too big to be fast and could not run down prey.  If that is true then t-rex could not have been a hunter and must have been a scavenger eating only animals that were already dead.
Another group says that it was faster than previously thought and was a hunter and a scavenger. 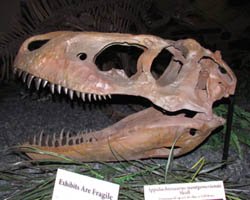 Still others say that there is evidence that tyrannosaurs hunted cooperatively. The theory is that the large mature adults would lie in wait while the younger faster “teens”  would chase  prey toward the waiting adults who would then spring the trap using their powerful jaws to make the kill.

There are other controversies when it comes to this huge carnivore. One is about what it is to be a Tyrannosaurus Rex. This may seem way too basic to disagree on but individual differences combined with age and sex differences make it hard to tell if some specimens are the same species or a different animal altogether. Tarbosaurus bataar is one tyrannosauroid that scientists are trying to decide if it should be regarded as a separate genus.

Many skeletons of Tyrannosaurus have been found. It is one of the most studied of all dinosaurs.

T-rex fossils have been found here.