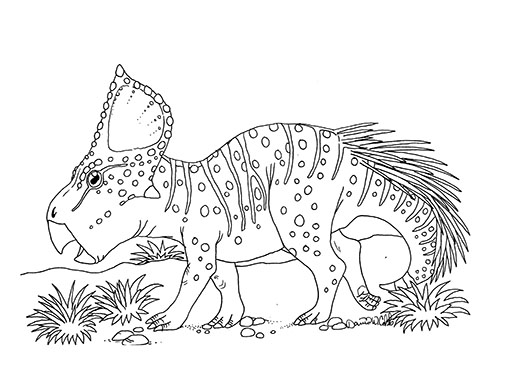 Protoceratops was an herbivore from Mongolia. The name comes from the Greek language ‘proto- meaning “first,” and ‘-certaops,’ meaning horn face. It looks like a mini version of Triceratops, with the same distinctive frill on its face. These frills were may have been used in combat, although some paleontologists think they might have been used as signs of dominance.  Oddly enough, Protoceratops did not posses the prominent horns, as their name would suggest.

In terms of dinosaurs, this guy was tiny. Protoceratops was only about 6 feet long 2 feet tall and weighed between 350 and 400 pounds. Don't let its size fool you, it had very strong jaws, teeth and a sharp beak that would probably do some damage. Alas, Protoceratops was a plant-eater and that fearsome beak was only used to chomp the yummiest vegetation. Mmmmmm, mmm!

Protoceratops lived during the Late Cretaceous period, roughly 75-71 million years ago and its predator was most likely the Velociraptor. In fact, a fossil of a Velociraptor clutched around a Protoceratops was discovered in Mongolia, in 1971. Paleontologists hypothesized that the dinosaurs had probably died in a battle. The scientists also added the story that they were either surprised by a sand storm or buried when a sand dune collapsed on top of them. What imaginations!

Can you believe it wasn't a paleontologist who found the first Protoceratops fossil?  Photographer James Blaine Shackelford stumbled upon the first specimen of in the Gobi desert of Mongolia. He was part of a expedition, led by Roy Chapman Andrews, looking for human ancestral remains. No early human fossils were found, but many dinosaur fossils were found. What a happy accident!

It was also Andrews who discovered the first known fossilized dinosaur eggs. They were found in conjunction wth the adult Protoceratops fossil, so paleontologists believed them to be Protoceratops eggs. Each egg was about 8 inches long, and newborn hatchlings estimated to have been about a foot in length.

Ever heard of the mythical creature, griffin? Griffins were described as lion-sized creatures, that walked on four legs, had large claws and a raptor-bird-like beak. Well, according to Asian folklore, Protoceratops may have been the image in mind for the griffin. 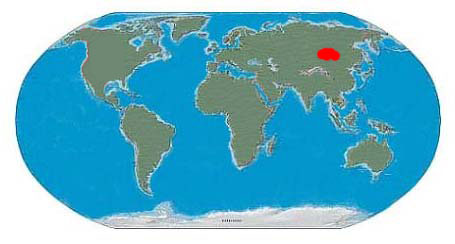