The Ordovician Period
The Rise of The Cephalopods

This is all about the Ordovician Period: The climate, geography, and the major events that shaped life on Earth. Some plants and animals thrived while others became extinct. 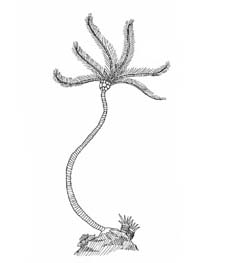 The Continents-North America and Europe
Modern continents of North America, Western Europe and Northern Europe were located in the tropics, on or near the equator. These land areas were sometimes covered with water and sometimes not. Toward the end of the Ordovician Period more of the land was out of the water. This was due to changes in the Earth’s climate.

Climate
During the first parts of the Ordovician the climate was fairly warm. The land uplifted and the continents moved around. When Gondwana stopped its movement over the South Pole, glaciers formed. This caused the sea level to drop and the climate to change. These changes led to a mass extinction at the end of the Ordovician Period.

Life In The Seas of The Ordovician Period

Life was still primarily found underwater, but there were more different species than ever before. The trilobites did not die out with the mass extinction at the end of the Cambrian period. Trilobites lived on and many new species developed. The Rise of The Cephalopods

New animal forms developed, too. The cephalopods became the dominant predators of this period. Cephalopods are a group of mollusks that are related to octopus and squid.The orthoceras was a straight-shelled cephalopod that lived in the largest open end of its shell. Its feet came out of its head! They could rise and fall in the ocean water like a submarine. The siphuncle was a tube in the center of the animal. When filled with air, the animal’s body floated upward. A burst of air out the back end of the siphuncle pushed the animal forward.

Brachiopods were also new in the Ordovician period. Brachiopods look like clams, but they do not belong to the same family. A brachiopod’s shells do not match. If you look closely, one shell is slightly larger at the hinge. The shells themselves each have bilateral symmetry. Clam shells have identical hinges so their shells are not symmetrical.

Crinoids were an echinoderm that looked like a feathery plant. They grew long “stems” and attached themselves to the ocean floor. The tentacles floated in the water. They caught the crinoid’s food.

Sponges, corals and even primitive fish lived in Ordovician waters. The plant life in the water was red and green algae. On the very bottom of the oceans were the first animals with primitive backbones. They did not move very well, but they would grow to become the most important new animal group in the sea. The seas of the Ordovician Period were full of many diverse species. 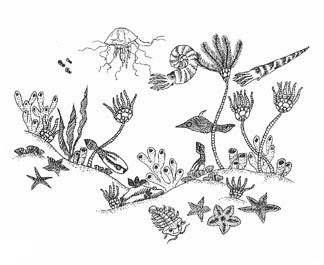 The Seas of The Ordovician Period

The First Land Plants
Along the edges of the water, groups of algae evolved into mosses and bryophytes. These plants must live in watery environments so the water can flow directly into and out of their cells. These plants had no veins for moving the water around inside their bodies, so water had to flow between the outside environment and the cells of the plants. These were true plants, because they had chlorophyll and could make their own food.

There were fungi in the water, too. Fungi feed on decaying matter. Fungi and algae left on the bare land worked together to form lichen. The lichen could break down the rock they lived upon. The broken rock became the first soil.

The next Period is The Silurian Period

What came before the Ordovician Period?