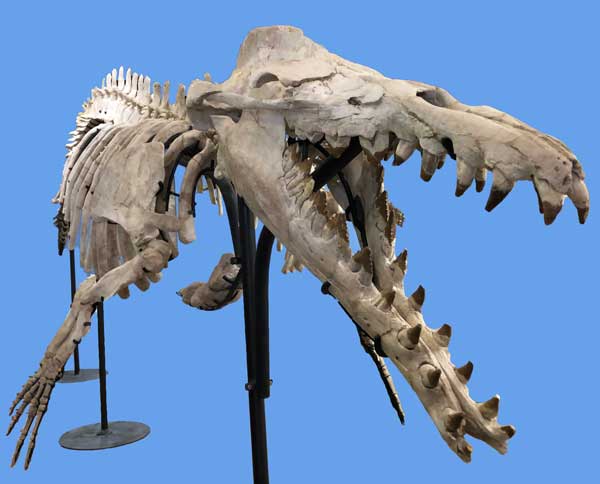 Roaming the seas some 41 to 34 million years ago was the Basilosaurus, a formidable prehistoric carnivorous whale from the late Eocene Originally thought to have been a monstrous reptilian creature, later evidence revealed that it was instead an early marine mammal.

Believed to have been quite common in the waters of the Tethys Sea, the Basilosaurus ranked among the largest animals present during the Paleogene geologic period. During this period the whale was an apex predator, easily taking on the likes of marine mammals, large fish and even sharks. However, science would reveal that the Dorudon (similar to dolphins) was its predominant or preferred source of food.

In this guide, we’ll take you on a journey to explore some of the most interesting facts about the Basilosaurus. Let’s dive in!

1. Early Fossils and a Rocky Start

Upon discovery, Basilosaurus fossils sparked much interest from American paleontologists. In the 19th century, scientists were already enamored with the recent discovery of other marine reptiles such as the Pliosaurus and Mosasaurus. Which led them to jump to conclusions about the whale being incorrectly classified as a “marine reptile”, naming it Basilosaurus (meaning “King Lizard”). It wasn’t until much later that the creature’s true classification was established. Despite this, the reptilian name remained intact.

For a whale, this creature had an interesting body type. Its frame resembled that of an eel, long and sleek, measuring up to around 65 feet from head to tip of its tail. Yet despite its incredible length, the whale clocked in at a meagre 5-10 tons. Because of this, some scientists speculate that the whale even swam like an eel, using an undulating motion. Yet much skepticism remains around this contention.

No, we’re not talking about that one cousin we all have. Although it wasn’t uncommon for massive predators of the time to be endowed with less than sizable brains comparative to their large bodies, the Basilosaurus set the bar quite low. The whale possessed what is considered to be a below-average brain size for the time period, suggesting that it was perhaps incapable of the complex social structure, communication and characteristics of modern-day whales.

This one came as a surprise to even us! Fossils of this whale had been around for decades prior to its official naming and classification. During this time its large fossils were used from everything from foundation posts for housing, to fireplaces and even chairs! 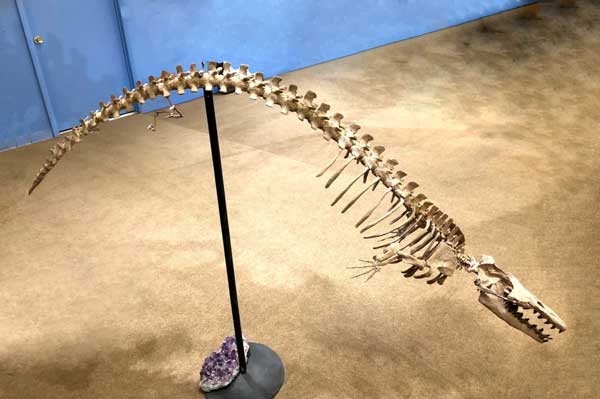 Basilosaurus is The Official State Fossil of not ONE, but TWO States!

5. The Official State Fossil of not ONE, but TWO States!

This one is a bit peculiar. It is rare for two states to share the same official fossil. Yet, both Alabama and Mississippi have selected Basilosaurus as their mascot as it were. Don’t let that fool you though, despite its regional affinity here in the USA, Basilosaurus fossils have been found as far as Jordan and Egypt.

6. Inspiration for a Famous Hoax

Back in 1845, a gentleman by the name of Albert Koch conceptualized and implemented one of the most notorious hoaxes ever made on the paleontology community. Koch painstakingly and meticulously reassembled Basilosaurus bones into what he dubbed as ‘Hydrarchos’ or ‘Ruler of the Waves’. Ever the opportunist, Koch charged 25 cents admission to view his creature.

We hope you enjoyed this brief introduction into the life and history of Basilosaurus as much as we did writing it.

You can find basilosaurus teeth for sale at fossilicious.com