The Basis For Classification

Ammonite shell structure is similar to the chambered nautilus.

The chambered part of the shell is called the phragmocone, of which each chamber is called a camera. The outside of the shell is often ornamented with ridges, spines, or a pattern of lines called lirae. This ornamentation, along with shell shape, is also considered in classification.

Siphuncle and Septa
Inside the shell there is a siphuncle, a tube used for propulsion and buoyancy.The location of the siphuncle is not like the nautilus. Instead of going through the middle of the animal, it runs along the inside of the outermost spiral. The picture below shows a fossil ammonite that has been broken. This allows viewing it's inner parts. You can clearly see the siphuncle and the septa.The septa, which separate the inner chambers of the ammonite, show folds instead of smooth arcs. It is the pattern created by the folds, along with the position of the siphuncle that is the basis of classification. 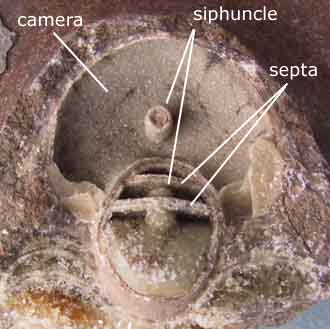 Aptychi - The Front Door
Ammonites were probably able to pull their bodies inside the shell for protection. Some speices from the Mesozoic era developed hard plates called Aptychi that covered the opening.

Ammonite Classification
Ammonites are, of course, members of the animal kingdom. Since they are without backbones, they are invertebrates. They belong to the phylum Mollusca because of their soft body and ability to create shells. Modern day varieties include snails, clams, and oysters, but the octopus and squid have a small internal shell or no shell at all. They are mollusks that belong to the class cephalopoda as does the ammonite. The tentacled head is the primary feature of the members of this class, so the modern chambered nautilus also belongs to this class. For our ancient fossil, the subclass is Ammonoidea.

These are the orders. There are also several suborders:

• Goniatitida- The goniatites ranged from the Devonian to the upper Permian Period. They are characterized by septa with round saddles and pointed lobes.

• Ceratida- This order existed from the Carboniferous Period to the Triassic Period. They are characterized by septa with round saddles and serrated lobes.

• Ammonitida- They first show up during the Permian Period and lasted through the Cretaceous Period. Their septa have folded saddles and lobes. The shells are decorated with a complex pattern of lines called lirae.

The Heteromorphs - A Breed Apart
Most ammonites have flat spiral shells, (planispiral). Some species had partial spirals, and then uncurled to a straight cone. Still others had a spiral section, then a straight section and then a curved hook so that the animal faced its spiral section. A few varieties did not follow the typical planispiral form at all. Some were helical and some curved wildly about apparently at random. All these non-planispiral forms were called heteromorphs.

Other extinct relative of the ammonites are belemnites, orthoceras, bacculites, and nautiloids.