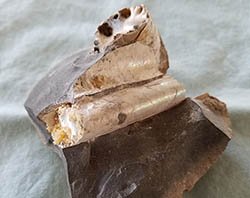 Baculite Mesa near Pueblo, Colorado is just the place for easy finding of the remains of ancient sea life. The fossil-loaded location was easy to find, easy to get to, and, most importantly, easy for picking up lots of marine fossils. Being novice rock-hounders, a spot where the fossils reveal themselves with little effort inspires us to keep up the search.

The baculite is a now-extinct sea creature that lived in many areas around the world during the late Cretaceous Period. It was a mollusk belonging to the class Cephalopoda and had tentacles that grew out of its head. (cephalo: “head” + poda: “feet”) This ammonite had the typical curled shell in its early life. When it grew older the shell straightened out. The image at right is bacculite fossil fragments.

During the Cretaceous Period, the western US was covered by an inland sea commonly referred to as the Pierre Seaway. The rock layer formed from this period is known as the Pierre Shale. Baculite Mesa has a nice layer of this grey to tan shale exposed all around it.

After a 2-hour drive and a lunch stop, we arrived at the mesa around 1...just getting to our destination in the heat of the day. Not the best planning, so we took along water for both drinking and spritz-ing. And we wore white, long-sleeved shirts to give some protection.

We called the posted phone number and asked permission to hunt. We learned from the owner, who drove out to meet us, that he’d lived on the land for many years and that the mesa had been generous with its supply of baculites washed out after every rain. After a brief chat about the best places to hunt, we started the climb to the layer of Pierre Shale.

It wasn’t more than a minute or two into our walk when Doug spotted his first baculite laying in the wash alongside the road! The guide book had said the baculites were easy to find, but this was amazing!

The exposed shale was broken into billions of tiny shards that piled up on the steep, soft sides of the mesa. Walking was a bit slippery and cactus dotted the slopes, so we took care with every step. We silently thanked our host who had recommended we change to long pants and sturdier shoes! We climbed to the top of the mesa and began to work our way down, gravity helping us manage through the shale.

Once our eyes adjusted to the terrain, we saw baculites EVERYWHERE! The slender white sections of the conical shells were scattered throughout the site. Most of these were casts of the original shell and didn’t bear the glossy markings of the original, but for beginners like us, this was an exhilarating find. After an hour or two, our buckets were filled with baculites and clams. One particularly great find was a clam whose 1-inch sides were splayed open like a butterfly. The bumps and ridges were perfectly preserved, with a bit of the original sheen still present.

Our water supply dwindled and the heat intensified, so we stowed our buckets of booty and headed for the artesian spring near our truck. Revived, we loaded our gear, called to thank our host for a successful day and were off to the next hunting ground. Baculite Mesa had been a success!

If You Go: Take I-25 to the Route 50 (Canon City) exit and turn east. Travel less than 5 miles to Baculite Mesa Road and turn left (north). After a short drive, you’ll arrive at a gate with a stop sign and posted phone number.

Remember this is private property and you need to get permission to be on the owner’s land.

The owner of Baculite Mesa would appreciate a phone call or email at least  2 weeks before the expected trip to his land. He is a kind and very accomodating man, but would appreciate the courtesy: