The Tertiary Period:
The Age Of Mammals Begins

The Tertiary Period Is the old name given to the first period of the Cenozoic Era. It is no longer an official term and has been replaced by the Paleogene Period for the first 3 Epochs while the next 2 now belong to the Neogene Period. It may be a little confusing and why change the name anyway? Well the name Tertiary was first used in the mid 18th century. At that time all of geologic time was divided into only 3 periods, Primary, Secondary, and Tertiary. Later a fourth period was added not mysteriously called Quaternary.

A lot has been learned since that time and many divisions have been added to organize our understanding of geologic time. We now have Eons, Eras, Periods, and epochs. Each of those divisions have divisions. See the currently recognized Geologic Time Line. The old system using 4 time periods could no longer be helpful. Yet 2 of the old terms were still in use until recently, the Tertiary and the Quaternary. As of 2013 the Tertiary is gone. The Quaternary remains.

The remainder of this page details the Tertiary of old. For more current divisions see the links above: Paleogene Period, Neogene Period, and the Geologic Timeline.

Each epoch has unique characteristics for climate and geography. The plants and animals changed from epoch to epoch also.

In the early 1800’s a system for naming geologic time labeled only four periods. They were named using the Latin forms of numbers for first, second, third and fourth. The word tertiary means “third.” It was the third period in this system. Today, we use a different system, but the name Tertiary is still common for the first part of the Cenozoic Era. Today’s system looks like this:

Tertiary Climate: A Cooling Trend From Tropics To Ice Age
The beginning of this period was very warm and moist compared to today’s climate. Much of the earth was tropical or sub-tropical. Palm trees grew as far north as Greenland! By the middle of the tertiary, during the Oligocene Epoch, the climate began to cool. This cooling trend continued and by the Pliocene Epoch an ice age had begun. 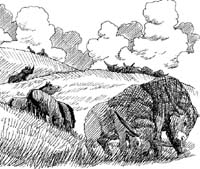 Grasses Support Grazing Animals
The plants of the Tertiary are very similar to the plants that we have today. The warm climate at the beginning of the period favored dense forests. As the climate cooled open woodlands and grasslands became abundant. The grasses were important because they supported huge herds of grazing animals. 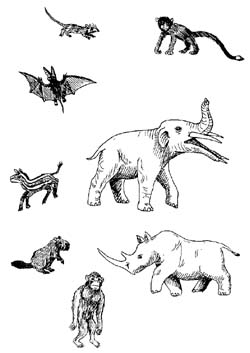 The Rise of The Mammals
The extinction event at the close of the Cretaceous Period wiped out the dinosaurs, large reptiles, and many other species. This left room for new animals to develop. The mammals became the dominant animals. In fact, the Cenozoic Era is often called the Age of Mammals. Most of the main groups of mammals were present by the Eocene Epoch. With the dinosaurs and other large reptiles gone mammals grew in size, numbers and diversity. They filled ecological niches in the sea on land and in the air. The table above shows what mammals came on the scene with each new epoch.

Hominids: Human Ancestors
During the Pliocene the first hominids appeared; these were our human ancestors! 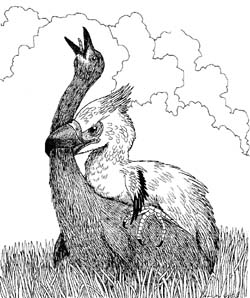 The Tertiary Was For The Birds
Birds did almost as well as mammals during the Tertiary Period. Many of the birds we know today were present. There were also many large flightless birds that are now extinct. These birds did particularly well before the mammals developed so many species.

Flowering Plants Means Nectar For Insects
The insect population increased in the Tertiary Period. Bees and other insects that lived on pollen and nectar of the flowering plants prospered.

The Tertiary Period Ends With An Ice Age and Land Bridges
The cooling climate of the Tertiary Period led to huge glaciers at the poles. The mountains of the world were also covered by glaciers, including the newly formed Himalayas and Alps. The huge amounts of water locked up in the ice lowered the level of the sea and land bridges appeared:

This enabled migrations of both plants and animals across these land bridges.

The Tertiary period which had begun hot and humid, ended in a cold dry ice age.

The next period is The Quaternary Period

Before the Tertiary Period is the Cretaceous Period

Fossils from the Tertiary Period for sale at our sister site Fossilicious.com 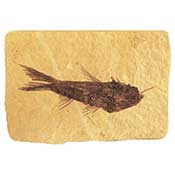 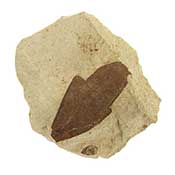 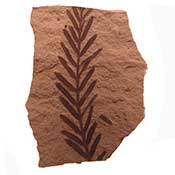 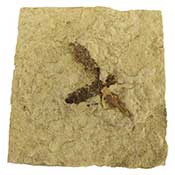